The BVI is 59.3 square miles and spread over 1,330 square miles. Additionally, the islands are British Overseas Territories. In this article we will explore all the pros and cons of living in the British Virgin Islands.

Read on for comprehensive details of the pros and cons of living in the British Virgin Islands.

Pros of Living In The British Virgin Islands

When living in the British Virgin Islands, the beach is never very far away. Cane Gardens Bay is one the most popular beaches in Tortola.

It’s an amazing beach for water activities such as kayaking, snorkeling and jet skiing. Access to the beach is free and it is located 5 miles west of the capital, Road Town.

One of the must see beaches and attractions in the BVI is The Baths and it is located in Virgin Gorda.

This is a unique national park on the southwest coast of the island. This beach has massive boulders which forms sea pools.  There is a fee required for access to this beach. Dependency of a Large Country

Citizens receive direct support from a large country which has its positives. Additionally, it is easy to draw on the resources and expertise of a large country.

As an example, if someone needs medical attention urgently in another Caribbean Island, at times visas may be required which involves time and red tape. Additionally, visas are discretionary and not because one’s case may be an emergency that entry is guaranteed.

Being an overseas territory gives residents easy access to the resources and expertise of a large country which is a huge benefit.

Citizens of the British Virgin Islands since 2002 have full British Citizenship. Therefore, relocation for job opportunities is seamless from a work permit standpoint for locals who want alternative options than those available on a small island.

Despite being a British Overseas Territory, the official currency of the Islands is the United States Dollar (USD).

Therefore, if you are considering relocating to the island, the risk of losing money due to foreign exchange conversion should be relatively low. This depends on your country of origin.

The Islands Are Safe

The British Virgin Islands are relatively safe islands and crime rate is low when compared to other Caribbean Islands. Nevertheless, according to Gov.Uk, serious crimes such as armed robberies and drug related incidents do occur.

Additionally, the Governor of the BVI John Rankin on February 22nd, 2021 shared his concerns about crime on the island. Police presence was increased on the streets both day and night.

Due care and diligence must be exercised by tourists to the island. Valuable items should be secured in hotel safes.

Avoid leaving trendy gadgets such as mobile phones and tablets unattended. Where possible, avoid being on the streets and in secluded areas alone especially at nights.

The Police on the island can be contacted at 999 or 911 in case of emergencies.

One amazing benefit of living in the BVI is ease of island hopping. You can find ferries daily from the islands to the main US Virgin Islands being St Thomas, St Croix and St John.

A passport is required for travel between the US Virgin islands and the British Virgin Islands.

As an individual living in the British Virgin Islands, you pay no income or capital gains taxes.

Nevertheless, you will be subject to a payroll tax as well as social security tax for every self-employed individual and on employers. Additionally, there are no gift or wealth estate taxes on the island.

Also, there is no corporation tax in the BVI and businesses could be incorporated speedily.

There is no restriction on where in the world a business that is set up in the BVI can operate.

Friendly Spirit of The People

As with many other Caribbean islands, there is a friendly and excellent community spirit which exists among people on the island.

Due to the islands robust financial sector, there is a thriving expat community which is welcoming. Therefore, if you are thinking about finding a job on the island, it is easy to adjust and make the island your home.

Once you have made friends with the locals, they will let you know the places to shop to get deals on the islands as well as persons who sell items such as fresh meat and fish. 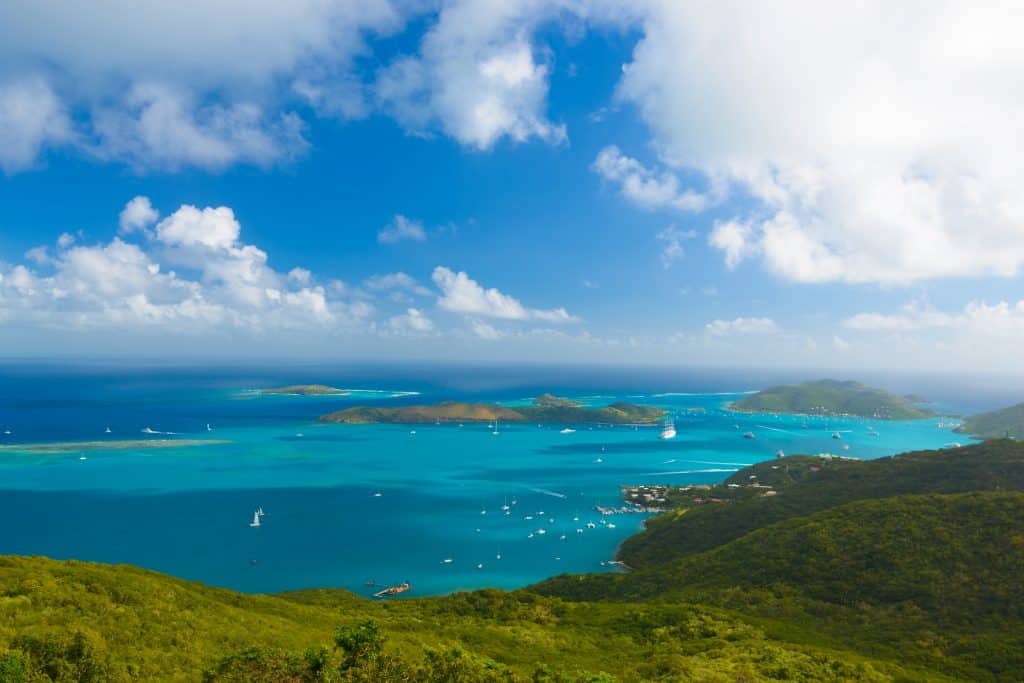 Cons of Living In The British Virgin Islands

As part of the Caribbean, the BVI are susceptible to natural disasters such as hurricanes.

The hurricane seasons runs from June 1 to November 30 annually. The British Virgin Islands experienced severe devastating impacts of hurricanes Irma and Maria in 2017.

There was a large damage to infrastructure which has significantly impacted the tourism sector on the island.

If you are planning on traveling to the BVI and other Caribbean islands during the hurricane season, it is wise to consider travel insurance.

The cost of goods on the island is extremely high.

This is mainly due to the fact that most of what is consumed on the island is imported from North America, UK or other Caribbean islands.

Some individuals travel to neighboring St Thomas as goods are cheaper over there and there is more variety and popular brands such as Kmart, Walgreens and Home Depot.

You Tuber, Sheek Flare Official has a video on cost of living in the British Virgin Islands and breaks down the costs of items on the island in great detail. Feel free to review the video below for further information.

One massive disadvantage of living in the British Virgin Islands is the absence of international flights from major international cities such as North America, Canada, Europe or South America.

According to the BVI Tourism Authority, international flights must connect to other Caribbean islands such as Puerto Rico, St Thomas, Antigua or St Maarten.

If you are visiting the BVI from Europe the easiest route is through Antigua as British Airways have direct connections from London Gatwick.

Alternatively, if you are traveling from North America, St Thomas or Puerto Rico are the best routes to consider.

There is a ferry service from St Thomas to Tortola if you will like some adventure. On the other hand, access from Puerto Rico is only via regional airlines such as Cape Air.

It is important if you are visiting the BVI to plan your travel plans carefully as you may have to overnight due to the lack of direct flights.

Feel free to check out the BVI Tourism for more helpful information on how to get to the island.

Due to the small size of the islands, there is a limited selection of goods and services available.

Nevertheless, individuals on the island can shop online and use a service such as Ezone to ship items to the island.

Ezone in the British Virgin Islands is located in Romasco Harbour House Building in RoadTown, Tortola. This location is next to Peebles Hospital.

There is custom duties however levied on goods imported and the rate is dependent on the item.

While there is a great spirit of community among people in small islands, this comes with the cost of the loss of privacy.

At times individuals may overstep which is a challenge that you will not face in a large country.

Being small islands, the job prospects are mainly within the tourism and yachting sector.

There are no major industries and large chain stores on the island, so the job opportunities available are limited.

The pros of living in British Virgin Islands are that the islands are safe, has friendly people, and amazing beaches. On the other hand, the cons are there are no direct flights from major international cities and limited access to the amenities and conveniences enjoyed in a large country.

If you are contemplating traveling to the British Virgin Islands or the rest of the Caribbean, cruising is an affordable option to consider. I have recently completed an informative course by cruise specialist, Emma Cruises which you should check out titled How To Cruise For Less.

This course provides detail tips and techniques on how to save money while cruising onboard, onshore as well as the importance of insurance. So if you if you are considering a cruise for your next Caribbean vacation, check out How To Cruise For Less.

Feel free to browse our website for more content on the British Virgin Islands and the Caribbean by using the search bar located at the top of this page. The following are some of our articles which we believe may be suitable for you.

Tortola Vs St Thomas (Which Island Is Better To Visit)

Virgin Gorda Vs Tortola ( Which Island Is Better To Visit)

Pros & Cons of Living In US Virgin Islands